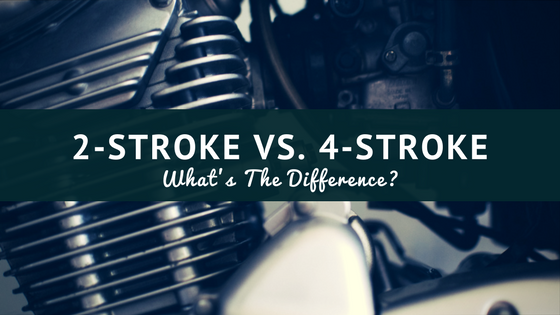 Automotive engines have transformed over the years, but two main gasoline powered combustion engine designs remain: the 2-stroke and the 4-stroke. While we’re sure you’ve at least heard these terms before, do you really know the difference between them? How do they work, and which is better? Read on to learn the answers!

How Do Combustion Engines Work, and What Is A “Stroke” Anyways?

In order to understand how these two engines are different, you first need to become familiar with the basics.

Difference Between A 2-Stroke & A 4-Stroke

The Difference between a 2-stroke and a 4-stroke engine is how quickly this combustion cycle process occurs, based on the number of times the piston moves up and down during each cycle.

In a 4-stroke engine, the piston completes 2-strokes during each revolution: one compression stroke and one exhaust stroke, each being followed by a return stroke. The spark plugs fire only once every other revolution, and power is produced every 4-strokes of the piston. These engines also do not require pre-mixing of fuel and oil, as they have a separate compartment for the oil.

Watch this quick video for a further description of how the 4-stroke engine works:

In a 2-stroke engine, the entire combustion cycle is completed with just one piston stroke: a compression stroke followed by the explosion of the compressed fuel. During the return stroke, the exhaust is let out and a fresh fuel mixture enters the cylinder. The spark plugs fire once every single revolution, and power is produced once every 2-strokes of the piston. Two-stroke engines also require the oil to be pre-mixed in with the fuel.

Watch this quick video for a further description of how the 2-stroke engine works:

So, which is ‘better’? Here are a few of the pro’s and con’s to both engine designs:

Two-stroke engines are typically found in smaller applications such as remote-controlled cars, lawn tools, chainsaws, boat motors and dirt bikes. Four-stroke engines are found in anything from go-karts, lawnmowers and dirt bikes, right up to the typical internal combustion engine in your vehicle. It’s up to you to decide which engine you prefer, and for what purpose.

At Berryman Products, we are committed to providing prompt personal service and producing products that meet the highest quality standards of performance, reliability and environmental responsibility. Check out our website and Facebook page for accurate information and quality products you need to handle your most common vehicle issues.