How to drive in the snow in Texas | Berryman Products 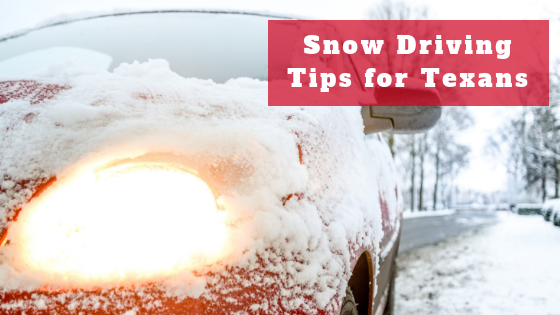 Break out those windshield scrapers and antifreeze, Texas, because it’s that time of the year when you’ll have to drive in the snow.

No, that’s not a joke, or a typo, it’s an inevitability – while not all parts of Texas get snow (and certainly not consistent amounts of snow like other parts of the country), it’s not unheard of to get some pretty impressive accumulation overnight. Like last year, when Western Texas got more snowfall overnight than Minneapolis – including a staggering 7 inches (!) in Corpus Christi.

This isn’t exclusive for West Texas, either, as places like Midland, Wichita Falls and Fort Worth have seen annual average snowfall totals above two inches. It’s not something that every Texan has to deal with every year, which can compound the confusion on the road when it does end up snowing in areas that don’t expect it.

So, want some good tips for driving in the snow? Keep reading below to get educated, or comment at the bottom with tips of your own!

Step One: Give Extra Distance To Stop

Snow isn’t a certainty for every part of Texas – and it’s definitely not frequent enough to necessitate snow tires for most drivers, so many Texans rock summer or all-season tires year-round. That’s bad news when Jack Frost comes around, though, as all-season tires have a much worse stopping distance than snow tires, which can lead to rear-end collisions and poor handling all-around.

The remedy for that – and it’s a pretty obvious one! – is to be extremely cautious when driving. Never drive like you’re in a hurry, give yourself extra time to get to your destination, and if you’re running late, don’t force things.

Winterizing your vehicle will make your life a lot easier if and when the snow does start falling. So, what exactly does winterizing entail? For one, making sure that your battery is in good shape, as cold temperatures can make things quite a bit tougher for an old or failing one. Testing your windshield defroster is also hugely important as it’ll keep your visibility up to par. On that same note, replacing your wipers can also be quite helpful, as you won’t just be dealing with snow and ice, but also the dirty sleet-like spray from other cars on the road. Old wipers will only push that around and smear it all over your windshield – new wipers won’t have any problems clearing it away.

One more necessity that you’ll want to invest in is a quality windshield scraper, especially if your car is parked outside most of the time. It’s never fun, but scraping the ice off of all of your windows – plus your side mirrors – before hitting the road will keep you safe. Many ice scrapers come with an attached brush for snow accumulation on your car – you’ll want to use that as well, even on the roof and hood of your car, as the snow will come off while driving and could distract drivers behind you.

That one’s pretty common, but there are two more things you’ll want that you may not think about. First is a (small) snow shovel, which can be used to dig your car out if you get stuck in a snow bank, or if there’s a rapid and significant accumulation. Second – and this is not a joke – is cat litter.

Again, not a joke, cat litter can be a life-saver for winter commuters and street parkers. Stuck in snow and ice? Use the shovel to dig out a bit of the snow and put down the cat litter – it’ll give your car added traction and help you get un-stuck.

Get Social. Check us out.

HEST – “High Energy Solvent Technology,” a Berryman exclusive, incorporates the use of strong solvents, as opposed to weak carriers and diluents such as mineral spirits or kerosene. As a “tip of the cap” to our HEST technology, positive feedback regarding any of our products is affectionately referred to as a HESTimonial.

View HESTimonials & Write Your Own