All About Combustion Engines - Berryman Products

All About Combustion Engines

It’s not often we ponder the working mechanics in our cars — those pieces, all joining forces, allowing us to be transported. 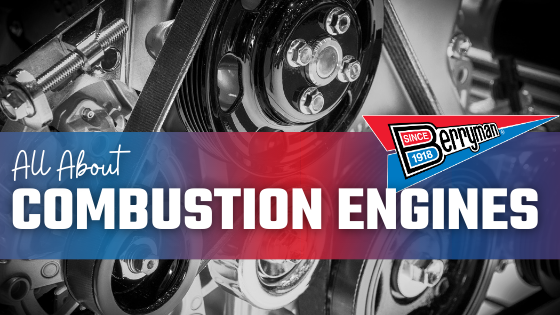 So what is a combustion engine?

These are defined as any engine generating power from oil, gas, or other fuels.

Mixed with oxygen to create tiny explosions called combustions, the fuel generates the energy needed to move the pistons.

How does it work?

For a majority of automotive vehicles, the basic principle is a four stroke system.

1 • The first is the intake stroke where the engine sucks in air and fuel into the cylinder.

2 • The second is the compression stroke where that air/fuel mixture is compressed to as small as it can be.

3 • The third is the combustion or power stroke where that air/fuel mixture is ignited and expands to push the piston down which rotates the crankshaft.

4 • The fourth and final stroke is the exhaust stroke which simply lets all of the exhaust out of the cylinder so the engine can start the cycle all over again!

Here’s a great visual, to see it all together in the works:

Notice how the heated fuel is turned into energy, which applies torque to move the pistons, which in turn powers the car. Beautiful, isn’t it?

The Different Types of Combustion Engines

Gasoline engines are the simplest type to understand! They can come in many different shapes and sizes, but all operate using the four-stroke cycle: intake, compression, combustion/power, and exhaust.

The benefits of gasoline engines? Well, they’re light, fuel efficient, and relatively easy to maintain, depending on the manufacturer.

Most people don’t know that these are the most efficient types of engines; diesel engines work similarly to gasoline engines, however, the difference is with the mixture of air and fuel.

Unlike gasoline engines, a diesel engine uses compressed air which then mixes with the diesel fuel to get even more compressed by the engine.

When that air-fuel mixture is compressed, it heats up and self ignites without the use of spark plugs.

So, if diesel engines are more efficient, why are they not great daily drivers?

The answer is simple: Most diesel engines are very heavy and have a very high amount of torque. Daily drivers are often sedans or smaller vehicles, having to meet certain weight requirements, meet stricter emissions standards, and simply do not need the power of a diesel engine. However, as technology advances, car manufacturers are finding ways to make diesel engines cleaner and lighter!

Turbine engines are what you can find on most commercial airlines, trains, or even tanks!

A turbine engine is very similar to a four-stroke engine except that it doesn’t involve the use of an engine block or pistons. Rather, it uses a turbine, which has several tiny fan blades. These fan blades suck the air in, compress it, mix it with fuel, and ignite that air/fuel mixture. The expanding or exploding air goes over a turbine blade section, which spins a rotating shaft, to spin your propeller, wheels, etc.

Having a two-stroke or a four-stroke engine means that during the exhaust stroke, carbon deposits and other unwanted build-up and debris can collect inside the cylinder, as well as on the pistons and valves, and end up gumming up your engine.

To counteract this, we suggest using our Berryman ®Total Engine Tune-Up for Gas and Diesel. It works by dispersing moisture and cleaning fuel injectors and carburetors, all while giving a smoother top-engine performance.

In the crankcase, it dissolves and disperses gum, sludge, and other residues for better lubrication and longer oil life.

More great news: You only have to use this product once a year!

Likewise, our Berryman® Oil Change Flush quickly and safely cleans harmful sludge and other deposits in the crankcase of all gasoline and diesel engines without the use of aggressive solvents.

To learn more about combustion engines and the difference between two-stroke and four-stroke engines, visit out blog about The Difference Between 2-Stroke & 4-Stroke Engines.